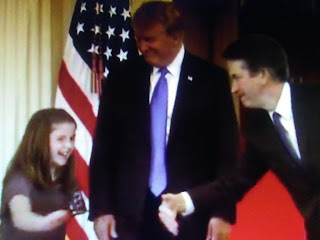 These kind of attacks were expected no matter who Trump chose.
This behavior will only backfire on Democrats because the media landscape is much different with the advent of alternative media.


Fox News reports President Trump's nomination of Brett Kavanaugh to replace retiring Associate Justice Anthony Kennedy has set the stage for a bruising confirmation battle, as Senate Democrats and liberal groups vowed to resist what could be a dramatic and long-lasting rightward shift on the Supreme Court.

Within seconds of Trump's announcement in the White House Monday night, the far-left political action committee Democracy for America called Kavanaugh, 53, a "reactionary ideologue" whose confirmation would "directly lead to the deaths of countless women with the dismantling of abortion rights."

And in a statement, the Women's March said ominously: "Trump’s announcement today is a death sentence for thousands of women in the United States."