The Evil Face of the Deep State’: The Disturbing Faces of Scumbag Peter Strzok 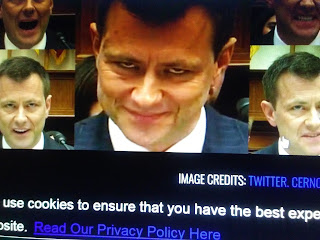 There's no amount of scorn this asshole Peter Strzok doesn't deserve.
He belongs in solitary confinement.

The embattled Strzok appeared to make smug and contemptuous facial gestures, as he was grilled before House Judiciary and Oversight Committees over numerous anti-Trump text messages sent during his time with FBI Special Counsel Robert Mueller’s probe into Russian meddling in the 2016 election.

Here’s the face of a wild animal backed in the corner.

I present to you the face of #PeterStrozk