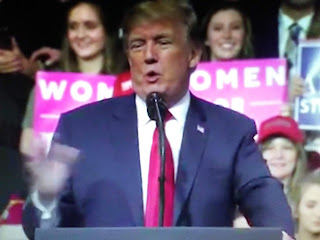 Trump is making a push for funding for The Wall.
If it doesn't happen the fault falls squarely on the Democrats.

NewsMax reports President Donald Trump accused Democrats of wanting "large-scale crime" in a series of tweets Monday evening.
As Trump continues his push to bolster security at the United States' southern border with Mexico, he had this to say:

Trump threatened Sunday to shut down the government if Democrats are not willing to help pass border security legislation that would include funding for a border wall.

Illegal immigration is a top National Security problem. After decades of playing games, with the whole World laughing at the stupidity of our immigration laws, and with Democrats thinking...
— Donald J. Trump (@realDonaldTrump) July 30, 2018

...that Open Borders, large scale Crime, and abolishing ICE is good for them, we must get smart and finally do what must be done for the Safety and Security of our Country!
— Donald J. Trump (@realDonaldTrump) July 30, 2018