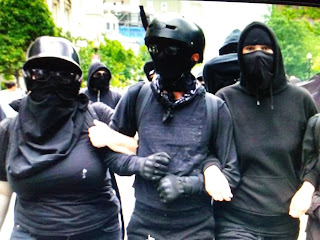 The media is making a big deal about the small number of Unite the Right protestors.
They've always been a small number from the start.  White supremacists are a minute minority is our society.  It's the corrupt media that mischaracterize them as being representative of all Whites.  It's slander pure and simple.

Fox News reports hundreds of counterprotesters, including Antifa, confronted a group of white-

nationalist demonstrators Sunday at the so-called "Unite the Right II" march toward the White House -- and many pushed back as officers tried to clear the area in the evening, triggering scuffles
A passing thunderstorm forced the far-right demonstrators to break down their rally stage in Lafayette Park near the White House prematurely, but as police escorted them from the area, reports of Antifa resistence emerged. Some 200 anti-fascists, many of them wearing black masks, confronted police about a half-mile from the White House as officers shoved them back, The Associated Press reported.