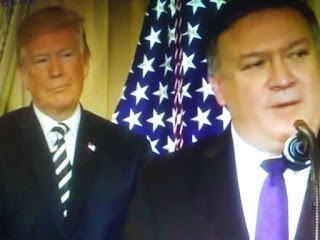 How is John Kerry not in serious violation of the Logan Act that prohibits private citizens from conducting foreign policy?
If AG Jeff Sessions was a competent attorney general, maybe some laws would get enforced.  But, we have a pick and choose legal system.  Ask Robert Mueller.


NewsMax reports  Secretary of State Mike Pompeo has unloaded on his Obama-era predecessor John Kerry for "actively undermining" U.S. policy on Iran by meeting several times recently with the Iranian foreign minister, who was his main interlocutor in the Iran nuclear deal negotiations.

In unusually blunt and caustic language, Pompeo said Friday that Kerry's meetings with Mohammad Javad Zarif were "unseemly and unprecedented" and "beyond inappropriate." President Donald Trump had late Thursday accused Kerry of holding "illegal meetings with the very hostile Iranian Regime, which can only serve to undercut our great work to the detriment of the American people."