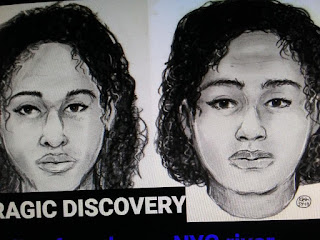 This was one of the most bizarre deaths in New York City history.
Two women bound belly to belly with duct tape found dead in the Hudson River.  Police rule it a double suicide given that the bodies showed no evidence of physical trauma.  Very baffling indeed!

Fox News reports two bound-together bodies that washed up on shore along the Hudson River in New York City have been identified as missing sisters from Virginia.
The New York Police Department says the bodies that were found Wednesday lying on rocks along the river were 22-year-old Rotana Farea and her 16-year-old sister, Tala Farea, both of Fairfax, Virginia.