Why she lost the election: Crooked Hillary claims Bill's sexual affair with Lewinsky 'absolutely not' abuse of power 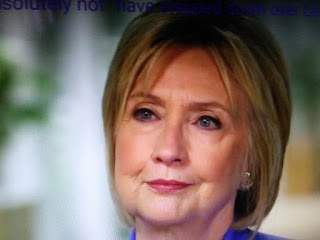 This woman cannot tell the truth if her life depended on it.
Bill Clinton's affair with Lewinsky was not only an abuse of power, classic sexual harassment and misconduct.  No woman's group came to the defense of Monica Lewinsky which is scandalous in itself.  Hillary pulled out all the stops to destroy Lewinsky and now has the audacity to revise history.

Fox News reports Hillary Clinton vehemently denied in an interview Sunday that her husband’s extramarital affair with then-White House intern Monica Lewinsky was an abuse of power and added that former President Bill Clinton was right not to resign amid a scandal that led to his impeachment on perjury and obstruction charges.
“Absolutely not,” the former first lady said during the CBS "Sunday Morning" interview when asked if Bill Clinton should have stepped down.
“It wasn't an abuse of power?” CBS News correspondent Tony Dokoupil asked.

Clinton responded: “No. No.”

What Democrats fail to understand is the Bill-Monica affair and it's aftermath of him refusing to resign as president, has taken the issue of infidelity off the table for future presidents forever.
at 10/14/2018 10:14:00 PM