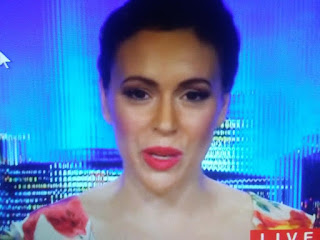 Is there a dumber person in the United States than Alyssa Milano?


Daily Caller reports the hashtag #boycottgeorgia began to trend after Stacey Abrams, a former Democratic state representative and romance novelist, announced Friday that she would no longer challenge the Georgia Secretary of State’s election results. While Abrams acknowledged Kemp would be the winner of the election, she refused to call her speech a “concession” because a “concession means to acknowledge an action is right, true, or proper.”

Before Kemp was certified as the official victor, actors were already threatening to boycott working in Georgia, a state with a large film industry that’s been dubbed the Hollywood of the South.

There are over 20 productions shooting in Georgia.

Is the entertainment industry willing to support the economy of a totally corrupt state that suppresses democracy; where the winner isn’t the best choice for the people but the best schemer or crook?
— Alyssa Milano (@Alyssa_Milano) November 17, 2018