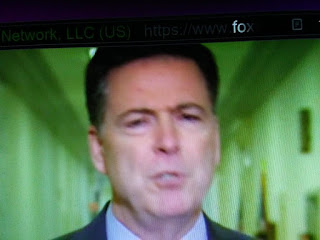 This SOB has the nerve to accuse President Trump of undermining the law
when he was the one who arranged for Hillary Clinton to escape prosecution for numerous violations of federal law?  The man is out of control!  And he continues to profit from his own crimes by hacking his book?  Do we have ANY rule of law left?  Apparently not. By the way, James Comey is no better than Michael Cohen.  They're both slimes.

Fox News reports former FBI director James Comey blasted House Republicans on Monday after exiting what he described as a “frustrating” closed-door hearing -- his second Capitol Hill appearance this month where he was called to answer questions on the Russia and Hillary Clinton email probes.
“Someday, they'll have to explain to their grandchildren what they did today," a defiant Comey said of the Republicans on the two House committees that conducted the interview, accusing them of not defending the FBI from President Trump’s attacks.
Republicans, for their part, have accused Comey of not being forthcoming. He was called back to Capitol Hill after an appearance in early December in which he repeatedly claimed not to know or remember the answers to numerous questions. Rep. Jim Jordan, R-Ohio, told reporters he was not satisfied with Comey's answers on Monday, either.