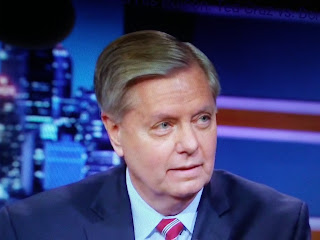 Sen. Lindsey Graham is a perpetual interventionist in the Middle East.
He wants to keep our troops there forever.  Trump ran on getting the U.S. out of foreign entanglements.  17 years is way enough of blood and treasure spent in that part of the world.


NewsMax reports Republican U.S. Senator Lindsey Graham said President Donald Trump reassured him about his plan to withdraw U.S. troops from Syria and his commitment to defeating Islamic State during a White House meeting on Sunday.

"We talked about Syria. He told me some things I didn't know that made me feel a lot better about where we're headed in Syria," Graham told reporters outside the White House after the meeting. "We still have some differences but I will tell you that the president is thinking long and hard about Syria - how to withdraw our forces but at the same time achieve our national security interests."