Trump Slams Hypocritical Dems: “You Voted Yes” On a Wall 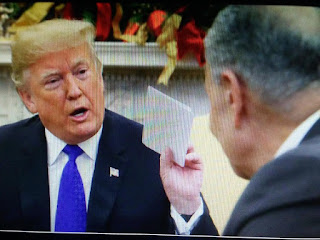 Trump is winning this battle over the border wall because Democrats are being exposed for their allegiance to illegals over American citizens.

InFo Wars reports President Trump taunted Democrats who previously expressed support for a barrier along the southern border, pointing out that some even voted in favor of funding projects similar to the border wall now being blocked by many in the D.C. establishment.

As the partial government shutdown continues, Trump unleashed a salvo of tweets aimed at hypocritical Democrats whose border security rhetoric has sounded nearly identical to the President’s in the past.

I’m in the Oval Office. Democrats, come back from vacation now and give us the votes necessary for Border Security, including the Wall. You voted yes in 2006 and 2013. One more yes, but with me in office, I’ll get it built, and Fast!
— Donald J. Trump (@realDonaldTrump) December 31, 2018

It’s incredible how Democrats can all use their ridiculous sound bite and say that a Wall doesn’t work. It does, and properly built, almost 100%! They say it’s old technology - but so is the wheel. They now say it is immoral- but it is far more immoral for people to be dying!
— Donald J. Trump (@realDonaldTrump) December 31, 2018