Trump’s immigration offer on DECA to end shutdown rejected by uncaring Dems, GOPers back the deal 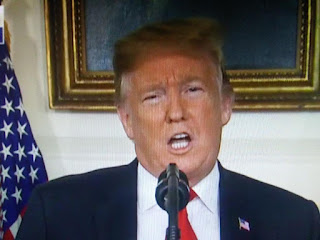 It’s the Democrats who are in an unsustainable position.
They're not even willing to give a counteroffer because they hate Trump.  That's childish.

In a televised White House address on Saturday afternoon, Trump offered Democrats a three-year extension of protections for 700,000 Deferred Action for Childhood Arrivals (DACA) recipients, in exchange for the $5.7 billion he has been seeking for a barrier along the nation's southern border with Mexico.

“Our immigration system should be a source of pride ... not a source of shame as it is all over the world,” Trump said in his plea.