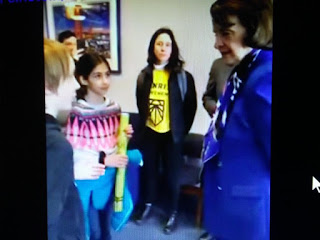 This meeting has given light to the fact there's another Green New Deal plan floating around in Congress.
What's really happening  is there's a fight between progressive Democrats led by Alexandria Ocasio-Cortez (the middle school students) and establishment Democrats, Nancy Pelosi (Dianne Feinstien) for control of the Democrat Party.

The 15-minute video of the impromptu Friday meeting captures the students and Feinstein debating the merits of the Green New Deal, an ambitious Democrat plan to shift the U.S. economy from fossil fuels to renewable sources such as wind and solar power.

The students passionately urged the California Democrat to support the legislation. But Feinstein, a 27-year veteran of the Senate, argued that the legislation had no chance of passing the Republican-controlled chamber.