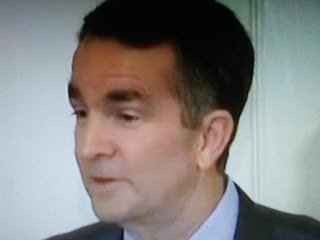 It's not looking good for Virginia Democrats.
When they're not dancing in black face and wear KKK robes, they like to kill babies after their born.

Trust Dot Org reports the political crisis in Virginia deepened on Wednesday when the attorney general admitted to wearing blackface in the 1980s at a college party, becoming the state's third high-ranking Democrat caught up in scandal.

Governor Ralph Northam was already fighting for his political life over a racist photo from his 1984 medical school yearbook that emerged last week, and the lieutenant governor sought on Wednesday to fend off allegations of sexual misconduct.

Attorney General Mark Herring, 57, who has expressed gubernatorial ambitions and called four days ago for Northam to resign, admitted in a statement he donned brown face paint at a party in 1980 to impersonate a rapper.