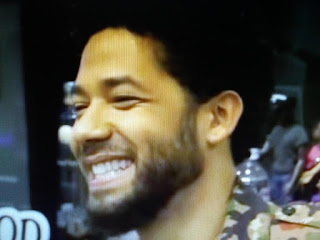 I believe something happened.  But, it had nothing to do with a bottle of bleach or Trump supporters yelling "This is MAGA country!"
That's Jussie telling stories.


The Source reports according to a recent report from Page Six, two neighbors of Empire Star Jussie Smollett have allegedly come forward to say that the actor is lying about being attacked in a hate crime.

The Chicago PD has been sure to remind the 36-year old thespian of the repercussions of filing a false police report, especially one of such magnitude in such a sensitive time for society in this country.
Agin Muhammad, one of Smollett’s neighbors, claims,

“I don’t believe it happened the way he said it did. I’ve been in this neighborhood five years. I don’t believe it, not around here . . . Half the people are gay and the other half are black.”