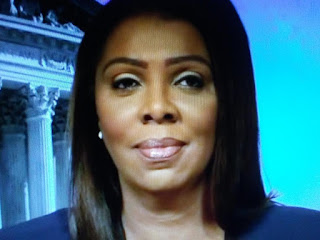 I live in New York all my life and I can attest that Letitia James is not the sharpest nail in the box.
She's very similar to Jerry Nadler who is also an incompetent boob who benefitted from New York machine politics.   She doesn't know enough that in the United States we investigate crimes, not people.  That's what they did in the Soviet Union.


NBC News report New York Attorney Gen.-elect Letitia James says she plans to launch sweeping investigations into President Donald Trump, his family and "anyone" in his circle who may have violated the law once she settles into her new job next month.

"We will use every area of the law to investigate President Trump and his business transactions and that of his family as well," James, a Democrat, told NBC News in her first extensive interview since she was elected last month.