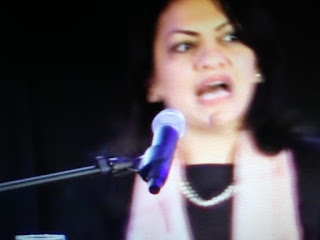 How this piece of crap woman is in Congress?

WND repots an Islamic member of Congress who made herself instantly famous with a foul-mouthed tirade against President Trump said the Islamic terror attacks of 9/11, in which Muslims killed nearly 3,000 people, made her fear Americans.
“I immediately called my brothers and told them to be very careful who you hang out with, telling my sisters, you know, just be real careful out there, and being really afraid of my fellow Americans,” Rep. Rashida Tlaib, D-Mich., said in a clip filmed month ago for a media company called Makers.