Knife Control anyone?: 2 killed, including schoolgirl, in Japan stabbing attack 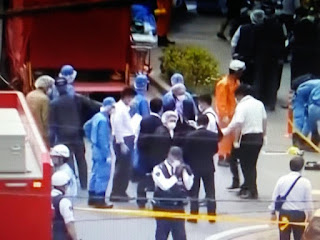 I'm not trying to be callous.   Only making a point that it it's not the knife or a gun.
It's the person wielding the weapon.  If one wants to kill or injury, they'll find a way no matter what weapon is banned.  That's the painlessness of the gun control argument.

AOL News reports A schoolgirl and an adult man were killed and 16 other young girls injured in a stabbing at a bus stop outside Tokyo on Tuesday, Japanese national broadcaster NHK cited authorities as saying, and another man detained at the scene also later died.
The girls, aged between 6 and 12, were students at a private Catholic school in Kawasaki city, south of Tokyo, and were boarding their school bus when the suspect attacked them, according to NHK.