She's an idiot: Ilhan Omar to Trump officials: Worry about his ‘ignorance’ 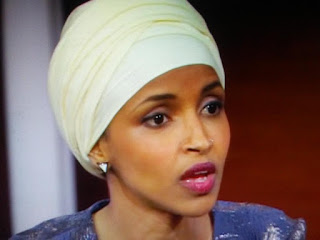 Ilham Omar is the gift that keeps on giving to the GOP if they have the good sense to use it.
She's a socialist, an Anti-Semite, and top it all off by being Un-American.  Everything she talks about confirms that hates America.   But, I don't see her trying to relocate back to Somalia.  That would cut off her money grab bashing the country that saved her life.

AOL News reports Democratic Representative Ilhan Omar has fired back at top Trump administration officials in a war of words over the leadership crisis in Venezuela.
“Speaking of ‘ignorance’, maybe the @VP and @SecPompeo should spend less time worrying about mine and more time getting the Trump his briefing before he gets on the phone with Putin, or the media, or anyone. This is embarrassing,” Omar tweeted Friday.
She linked the comment to a tweet about a USA Today report which says: “President Donald Trump contradicted his own top advisers Friday by suggesting Russian President Vladimir Putin was not meddling in Venezuela.”