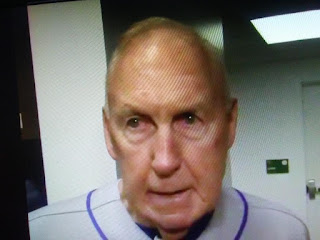 Last year in New York an elderly man walking on the streets of Manhattan with a walker was attacked by a troubled teen with a golf club.
The incident was caught on video and it was a disgusting thing to watch.  Thankfully, some bystanders quickly came to the senior's aid and restrained the attacker until police arrived.

What happened afterward, I thought, was also appalling.  The story didn't make the front page of the papers.  It didn't lead any newscasts.  It was treated as though it was just another thing that happened.  Had the same thing happened to Cardi B, we wouldn't stop seeing it everywhere.  And that's the problem!  We don't care as nearly enough about the elderly as we should.

These people are our treasures and we have a lot to learn from them everyday we're blessed to still have them among us.

Case in point.  The New York Mets hired an 82 year old pitching coach named Phil Regan.  The Mets are struggling, especially their pitching staff which supposed to be their strength.  Phil Regan pitched alongside Sandy Koufax.  The amount of pitching wisdom inside of his head is immense, probably more than anybody in the world.  So the Mets took advantage of a treasure they already had under their noses.  But, the ridicule came quickly.  The jokes were too easy to make.  "Can he get to the mound without a wheelchair?"  Regan still pitches batting practice.  He's still in good condition at his advanced age.

So what's the problem?

It all comes back to our societal attitude towards the elderly and it needs to stop once and for all!

This is Phil Regan talking about working with Mets closer Edwin Diaz whose been struggling mightily.

"He came off the mound and said it worked"