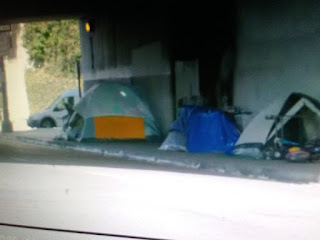 This is life under Democrat government and the story is the same in other cities where they have one party rule.
Crime increase, quality of life deteriorates. and residents suffer.  It's true in LA, New York, London, and San Francisco.   These genius Democrats can't fathom that having a generous welfare state is a magnet for the homeless?  It's pretty simple math that's beyond liberals.


KTLA reports the number of homeless people counted across Los Angeles County jumped 12% over the past year to nearly 59,000, with more young and old residents and families on the streets, officials said Tuesday.

The majority of the homeless were found within the city of Los Angeles, which saw a 16% increase to 36,300, the Los Angeles Homeless Services Authority said in presenting January's annual count to the county Board of Supervisors.