'This election is about you. Your family, your future & the fate of YOUR country': Trump lays it on the line at 20,000-strong Orlando rally as he kicks off 2020 re-election campaign 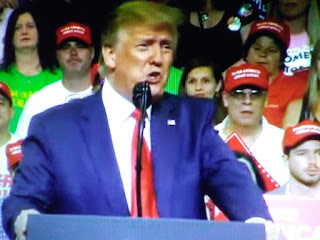 Don't believe the dishonest polls put out by our very corrupt media machine.
President Trump will win re-election by a landslide and tonight's rally was the first step.

Daily Mail reports President Trump spent a Tuesday night rally he'd advertised as a 2020 kickoff hammering his old foe Hillary Clinton for acid washing her emails and failing to deliver on her pledge to beat him, while Democrats vying for the party's nomination now escaped his wrath.
Noting that he’s under constant media scrutiny, Trump said that he’d be sent to the slammer if he ordered aides to destroy potential evidence.
‘But, can you imagine if I got a subpoena, think of this, if I got a subpoena for emails, if I deleted one email like a love note to Melania, it's the electric chair for Trump,’ he claimed in a campaign speech in Orlando.
Trump said subpoenas