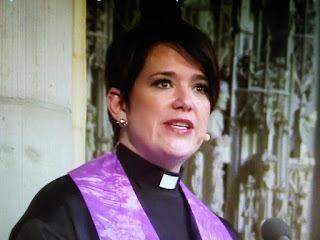 This story doesn't shock me given how liberal Riverside Church is.
It's not exactly orthodox Christianity.  How liberal is Riverside Church?  From The New York Times: The church has ministries that fight climate change, support immigrants seeking asylum in the United States and help former prisoners after incarceration. It has also issued many “faith-based proclamations,” including one declaring the church’s embrace of the L.G.B.T.Q. community. (“Our sexuality,” it said, “is a gift from God.”)

NY Post reports the reason for her ouster is far more stimulating than any sermon this pastor could have delivered.

On May 15, Butler allegedly took two Riverside assistant ministers and a female congregant to a sex shop in Minneapolis called the Smitten Kitten, during a religious conference, according to sources familiar with the out-of-town shopping excursion.