Trump celebrates US might, avoids politics in rousing speech... 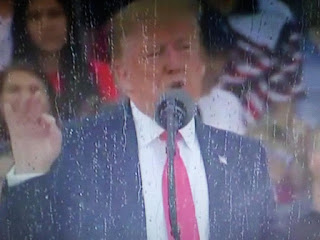 I thought it was a terrific event.

Yahoo News reports President Donald Trump sang the praises of the US military and American heroes of the past two and a half centuries Thursday, skirting politics in a rousing Independence Day speech in Washington.

"What a great country," Trump exclaimed in an address saturated with patriotism and exceptionalism, after critics accused him of hijacking the annual celebration.

"For Americans, nothing is impossible," he said.

Combat aircraft, including the rarely-seen B2 stealth bomber, flew overhead as Trump scrolled through myriad events of US history, from groundbreaking inventions to battlefield victories. He drew cheers of "USA! USA!" from an enthusiastic rain-soaked audience of tens of thousands on the National Mall in Washington.