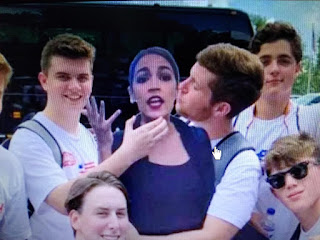 I don't think a cardboard cutout can be groped or choked.
That can only be done to a person not an inanimate object.  AOC has no sense of humor like most Libs.

“Hey @senatemajldr – these young men look like they work for you,” Ocasio-Cortez tweeted.

“Just wanted to clarify: are you paying for young men to practice groping & choking members of Congress w/ your payroll,” she asked, “or is this just the standard culture of #TeamMitch?”