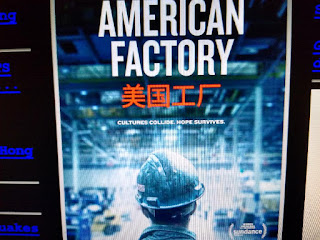 Being that I know the Leftist mindset, any film produced by Barack Obama is a waste of time top watch.
The American economy is booming under the Trump presidency in a manner Obama could never thought was possible.  This film was made to trash a booming economy and paint a negative spin to what's good about it.


Yahoo News reports "They refer to us as the foreigners," says a downbeat employee at the Ohio car glass factory where hundreds of Chinese laborers have come to work, far from their wives, children and homeland.

But the worker in question is American, not Chinese, and is finding life very different under new management after billionaire "Chairman Cao" swept into town to reopen the shuttered, iconic former General Motors factory in 2014.

This is "reverse globalization," say Oscar-nominated directors Steven Bognar and Julia Reichert, who filmed the GM plant's closure in 2008 and returned to chronicle its reopening by Fuyao corporation for the documentary "American Factory."