Virtue Signaling to fool the public: CEOs of major corporations Amazon, Apple and J.P. Morgan say their new business focus is to 'improve society' rather than make money 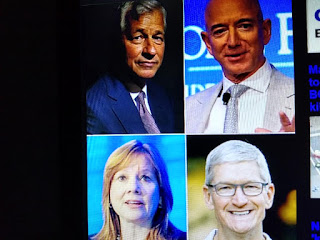 If this were actually true, then the CEOs for these top corporations would be immediately fired.
This is nothing but a self-serving, virtue-signaling, wink-wink statement to keep the mobs with pitch forks at bay.  Don't be fooled.

Daily Mail reports the CEOs of nearly 200 of the top companies in the U.S. have redefined the purpose of a corporation, saying a stakeholder’s interests are no longer the top priority - and the new focus is to better society.

The updated definition was released on Monday by the Business Roundtable, a group that dates back to 1997 and gathers together many of America’s most influential corporate leaders including top names like J.P Morgan, Boeing, Apple, and Amazon.

The statement redefined the purpose of a corporation with social consciousness in mind, saying corporations are now committed to valuing customers, investing in employees by hiring diverse groups and compensating them fairly, dealing ethically with suppliers, protecting the environment with sustainable practices and supporting local communities.