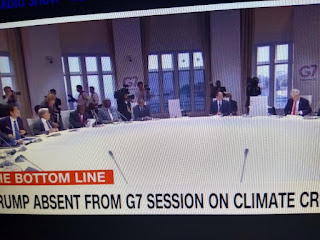 The majority of Americans see the climate change hoax for what it is--a scam!

InFo Wars reports while President Trump rubbed elbows with globalists at G7 in Biarritz, France, he did not attend the assembly’s climate talks.

In one of the conference’s last meetings, various heads of state held discussions addressing the issue of manmade global warming.

Photos circulating show world leaders including Germany’s Angela Merkel, French President Emmanuel Macron and others sitting around a table while a chair in the middle was left noticeably vacant.