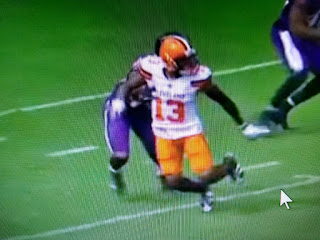 Odell Beckham Jr has a world of talent. But, he's also a world-class jerk.  That's why the NY Giants got rid of him.

AOL Sports reports Baltimore Ravens cornerback Marlon Humphrey has been all over Cleveland Browns wide receiver Odell Beckham Jr. during Sunday’s Browns-Ravens contest. Halfway through the fourth quarter, OBJ had zero receptions for zero yards, a sign that he has been well-covered.

Beckham obviously didn’t like it much. Tension between him and Humphrey was brewing all game, and the two had some passionate exchanges after plays. It boiled over and came to blows in the third quarter, resulting in this stunning visual of Humphrey choke-slamming Beckham to the ground while a referee watches it play out on the ground in front of him.