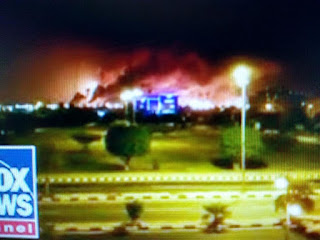 Iran is really pushing for a confrontation with civilized nations.
By the way, I never liked drones because they pose this type of threat.


Yahoo News reports for many of the national security teams that monitor threats on the U.S., the apparent drone strike Saturday on the heart of Saudi Arabia’s oil production facilities was the realization of their worst fears.

Based on early reports, multiple relatively inexpensive drone devices were able to pierce Saudi defenses in a way that a traditional air force could not: flying long distances to drop potent bombs that apparently set vast portions of the Saudi petroleum infrastructure ablaze.