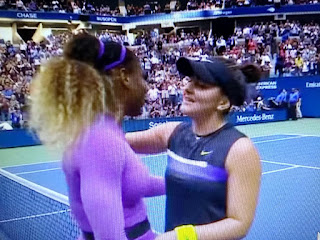 I'm glad to see Serena lose because I was sick and tired of the media making such a fuss about Meghan Markle attending the match.
But, it wasn't Serena's fault she lost.  Blame Meghan.  That's the way victimhood works you see.


Daily Mail reports tennis fans have accused Meghan Markle of jinxing Serena Williams last night as she watched the tennis star lose and fail to secure an historic 24th Grand Slam at the US Open, just months after she attended Williams' defeat at Wimbledon.

The Duchess of Sussex, 38, was called a 'bad luck charm,' with fans citing the resounding loss at the Wimbledon final to Simona Halep and the year before at SW19 to Angelique Kerber.

The Royal was the centre of attention in New York as she watched with Williams' mother Oracene Price but the pair were left disappointed as the former number one was beaten 6-3, 7-5, by Canadian Bianca Andreescu.

One Twitter user wrote: 'Dear Meghan Markle please stop attending Serena's finals matches. You are a jinx. Signed fans who are not her friends.'