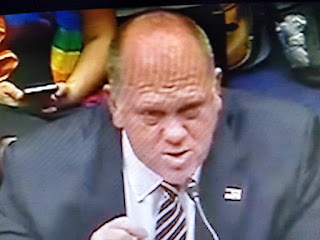 Progressives are actively sowing the seeds of hatred around the country.
It's irresponsible and dangerous for citizens in every city and state governed by Democrats.

NY Post reports Rep. Alexandria Ocasio-Cortez loudly banged a gavel to shut down ex-acting Immigration and Customs Enforcement director Tom Homan when he kept defending himself and his agency after she repeatedly told him that his time had expired during a contentious House hearing.

The confrontation occurred Wednesday during a House Subcommittee on Civil Rights and Civil Liberties hearing on the Trump administration’s decision to deny medical deferral requests from illegal immigrants with life-threatening illnesses.