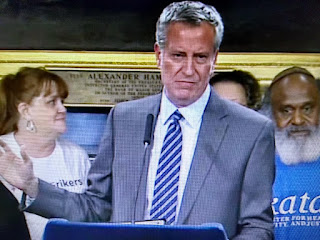 Enough money was passed around by rich donors who want to develop the land where Rikers Island sits.

Can you say Casino?

Make no mistake.  This isn't about treating dangerous criminals more humanly.  It's all about the dirty cheddar placed in the grubby hands of dishonest Leftists who dominate New York city politics.

Anything else uttered about this is a bunch of nasty lies, deceit and diversion.  This is the most crooked city council in. New York city history led by a homosexual, Corey Johnson

The end has come for Rikers Island.

the City Council on Thursday approved Mayor Bill de Blasio’s polarizing plan to shutter the scandal-scarred complex by 2026 and replace it with four smaller borough-based jails – but not without plenty of pushback from pols and community activists.

The Brooklyn, Queens and Manhattan portions of the plan each passed by tallies of 36 – 13, while the Bronx part passed 35 – 14.