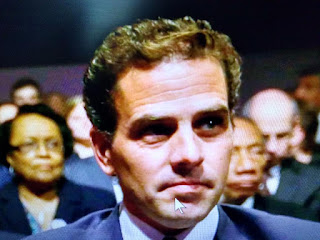 Fox News is kind of late to the party
because I posted an interview on October 6 Mark Levin did with Peter Schweizer who confirmed Hunter Biden was getting paid that much.  How could Hunter Biden be paid as a "consultant" in the oil and gas industry when he has no expertise in that field?  It had more to do with being Joe Biden's son who was in charge of Ukraine policy at the time.  That's how Joe Biden and his drug addict son got rich!  Joe Biden sold out his office!

Fox News reports Hunter Biden was reportedly paid $83,333 per month after being hired in 2014 by Burisma Holdings, one of Ukraine’s largest natural gas companies, while serving as a non-executive “ceremonial figure” with a “powerful name,” a report said Friday.

Between April 2014 and November 2015, Biden and Archer each received monthly payments of $83,333 for “consulting services."

Joe Biden admits he pressured Ukraine officials to fire prosecutor investigating his son. What Joe did was a Quid Pro Quo.
at 10/19/2019 10:58:00 AM