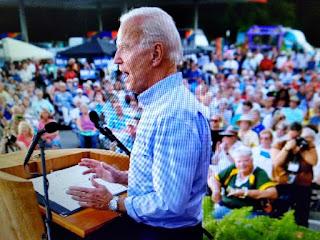 This is the dirty little secret the kying MSM doesn't want to admit.  Elizabeth Warren is leading in the polls in both Iowa and New Hampshire.
But, in South Carolina where 60% of primary voters are Black, Joe Biden still dominates.

In 2007 Hillary Clinton led in the polls before the Iowa Caucuses  and a little knows state senator from Illinois named Barack Obama stunned the poetical world and won Iowa.  Overnight Black support switch from Hillary to Obama and within days the late Sen. Ted Kennedy announced his support for Barack Obama.

I predict something similar will happen again if Elizabeth Warren goes on to win Iowa.  A prominent black figure, the Rev. Al Sharpton, Jessie Jackson, or Oprah Winfrewy or all three will declare their support for Elzabeth Warren or whoever else wins Iowa.

Biden is as good as dead politically.