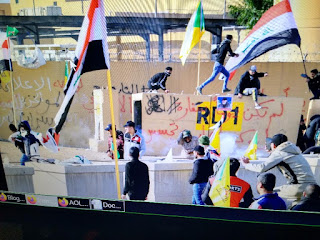 This will not be another Benghazi!

Epoch Times reports Iran-backed militias withdrew from the U.S. Embassy in Baghdad, Iraq on Jan. 1 after security forces fired rubber bullets, tear gas, and stun grenades at the mob of Iraqis who gathered at the compound.

The withdrawal came a day after a mix of protesters and militia members and supporters stormed the embassy’s outer walls, prompting a contingent of U.S. Marines to deploy from Kuwait.