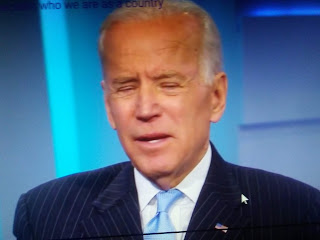 Joe Biden is lucky enough to know what states he's in.  He's a clown!

The former Vice President, 77, made the gaffe while responding to a voter who asked whether he could be trusted on foreign policy, given that he voted to authorize the use of military force in Iraq in 2002 and cautioned President Obama against conducting the successful raid on Osama bin Laden's compound in 2011.

According to Politico, Biden at one point scrambled the two separate incidents in his 'lengthy response' by mixing up the former Iraqi president with the one-time leader of al-Qaeda.

The incident occurred last Saturday at a rally in Des Moines - three days before he mixed up Iran and Iraq while speaking at an event in New York.