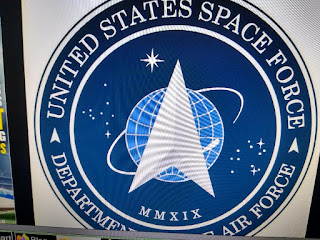 The MSM is trying very hard to portray a backlash against this symbol by Star Trek fans.  I believe no such backlash exist.  It's just the MSM looking to start up trouble like they always do against Trump.  As a Star Trek fan, I'm thrilled with it.

Space reports President Donald Trump on Friday (Jan. 24) officially unveiled the logo for the U.S. Space Force and the reaction has been strong. It might just be because the logo, which draws heavily on the new military branch's Air Force heritage, bears a striking similarity to a "Star Trek" insignia.

Trump announced the new Space Force logo on Twitter, the latest in a series of reveals for the newest branch of the U.S. military that included the service's new uniform nametapes last week, as well as the swearing in of Gen. John W. Raymond as Chief of Space Operations.

After consultation with our Great Military Leaders, designers, and others, I am pleased to present the new logo for the United States Space Force, the Sixth Branch of our Magnificent Military! pic.twitter.com/TC8pT4yHFT
— Donald J. Trump (@realDonaldTrump) January 24, 2020