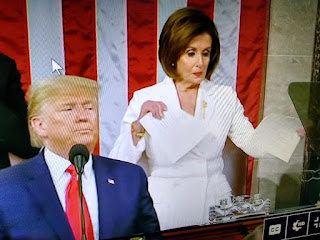 Nancy Pelosi is not only a disgrace to Congress, but also a disgrace as a wife, a grandmother and a woman!
She sets a very poor example to our children and she needs to just retire and go away.  Let her pick up all the human feces that are all over the streets of San Francisco her policies helped put there.

AOL News reports House Speaker Nancy Pelosi, D-Calif., said she felt “liberated” Thursday as she lashed out at President Donald Trump for the “falsehoods” that she said he spread in his State of the Union address on Tuesday and defended her decision to tear up his speech.

“I tore up a manifesto of mistruths,” Pelosi told reporters at her weekly news conference, referring to the moment two days earlier when she ripped up the paper copy of Trump’s address to the nation once he finished speaking.