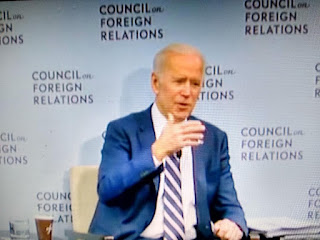 Well, what do you know.  This may cause Joe Biden a little difficulty running for president.

Joe Biden made the remarks during a meeting of foreign policy specialists. Biden said he, “Threatened Ukrainian President Petro Poroshenko in March 2016 that the Obama administration would pull $1 billion in U.S. loan guarantees, sending the former Soviet republic toward insolvency, if it didn’t immediately fire Prosecutor General Viktor Shokin.” Biden suggested during his talk that Barack Obama was in on the threat.