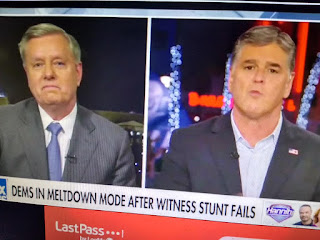 It was bullshit for day one!
The Democrats never had a chance to convict Trump on a hoax and a scam by the Dems to once again bring him down.

Mediaite reports Lindsey Graham appeared on Fox News tonight after the Senate rejected calling witnesses at the impeachment trial, and Sean Hannity started by saying, “Thank God we got to where we got to.”

Graham commended Mitch McConnell and said while he wishes it would be sooner, the acquittal vote will take place next Wednesday.

“I went to the school of hard knocks. You know what I believe about all of this? It was a bunch of partisan bullshit in the House. It continued in the Senate. It’s gonna end Wednesday, the president’s gonna get acquitted, this is all gonna blow up in their face,” he added.