Democrats and the Media rooting for a bad economy, Trump gets reelected anyway 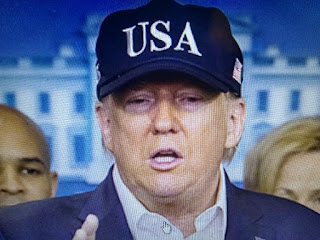 Let's say the economy reaches depression levels.  The unemployment rate is 25% and the talking heads on CNN and MSNBC are in glee because they think voters will throw Trump out of office.

Do you think the people are going to vote for Joe Biden, a guy who doesn't know what state he's in?  Or a crusty socialist like Bernie Sanders who would be happy to nationalize American business and make the United States in the new Cuba?

The wisdom of the American people would realize that President Trump is not responsible for a virus that started in Communist China.  Who knows?  Maybe this virus was weaponized by China in their laboratories to get rid of Trump?

It's been the president who has shown leadership tin going after Trump for stealing our intellectual property and trade imbalances.  By the way, Joe Biden and Bernie Sanders love China!

Do you see the deal?

Of course all this is speculation and none of it might take place.   Although in the long run all these factors will come into play and the American people will vote with their feet and re-elect President Trump in huge numbers nonetheless.

Sorry Democrats and MSM to raid on your parade!