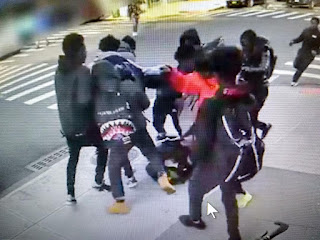 The kids in this video are animals.
Their parents should hang their heads in shame for raising such savages!

NY Post reports police were questioning one suspect and have a motive in the vicious mob beating of a 15-year-old girl on a Brooklyn street, law enforcement sources said Friday.

Cops were grilling a teenage boy in Crown Heights Friday after a group of teens savagely attacked the girl Thursday — as retaliation for a fight she got into earlier in the day, according to the sources.
see also

The caught-on-camera beating unfolded after the girl allegedly beat up another girl earlier in the day at school, according to the sources.
The group of teenage attackers were allegedly friends with the girl who the victim had tussled with, law enforcement sources said.