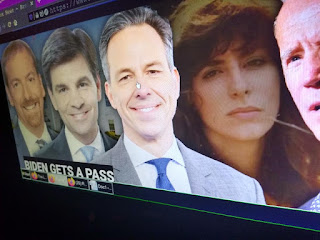 Of course!  This is called mainstream media corruption.
It's only Republicans that get the business.  Democrats get to rape like Bill Clinton, murder like Ted Kennedy, and rob taxpayers like Nancy Pelosi with her insider trading stock deals.

A now-infamous clip from a 1993 episode of CNN’s "Larry King Live" resurfaced on Friday, appearing to include the mother of Tara Reade -- who has accused Biden of past sexual assault while in the Senate -- alluding to “problems” her daughter faced while working as a staffer for the then-U.S. senator from Delaware. Reade later confirmed to Fox News that it was her mother on the call, and the allegations against Biden reclaimed the spotlight.

However, CNN’s Jake Tapper interviewed former candidate for governor in Georgia Stacey Abrams about her ambitions to Biden’s running mate on “State of the Union” and failed to ask about the allegations.