Throwing Trump under the bus: Dr. Anthony Fauci Tells Al Sharpton He Warned Trump Admin in Mid to Late January “We Were in Real Trouble”from Coronavirus 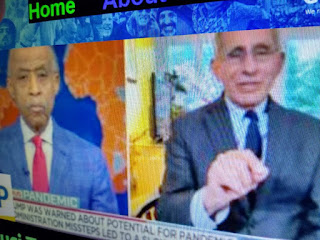 I gotta feeling that Dr. Fauci is beginning to feel the heat because there's a lot of unanswered questions that Americans are asking.

The U.S. is in lockdown because of his advice and 18 million plus jobs have been lost due to his advice.

Fauci said he told the administration “we were in real trouble” from the COVID-19 Chinese coronavirus in mid to late January and that Trump’s travel bans were instituted too late to be effective. Earlier on Sunday Fauci told CNN that lives were lost because Trump didn’t heed his advice for social distancing and lockdowns in February.
However, at the end of February Fauci himself was telling Americans they didn’t have to change their lifestyles over the coronavirus.

Fauci has served since 1984 as the director of the National Institute of Allergy and Infectious Diseases at the NIH.

Dr. Anthony Fauci and I discuss when he first found out about coronavirus, matching the proper resources with those w/ higher risks, and more. #PoliticsNation pic.twitter.com/6Qo5eKn0ai
— Reverend Al Sharpton (@TheRevAl) April 12, 2020

Look at what Fauci said back in February. "We're not seeing a lot of cases in the United States!"