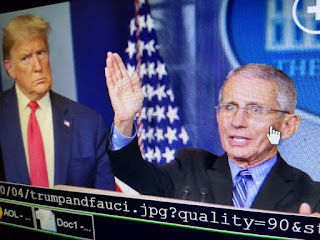 Dr. Fauci talks too damn much.
He really needs to be muzzled.  Bad enough over 18 million have lost their jobs as a result of his recommendations.  He needs to own up to it.

NY Post reports President Trump on Sunday night retweeted a post that called for the ousting of Dr. Anthony Fauci after the infectious disease specialist appeared on CNN.
The tweet from DeAnna Lorraine, a former GOP candidate for Congress, included the hashtag #FireFauci and referred to Fauci’s concession that more lives could have been saved if the US had acted sooner to stop the spread of coronavirus.
“Sorry Fake News, it’s all on tape,” Trump wrote, insisting his travel ban was the action needed to stem the virus. “I banned China long before people spoke up.”