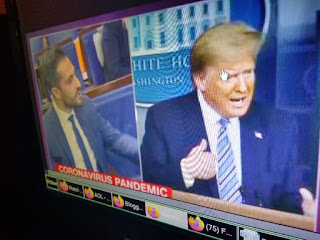 These people who work for the MSM never learn that Trump never lets them get away with their "gotcha" questions.

NewsBusters reports during Sunday’s White House Coronavirus Task Force briefing, President Trump clashed with two usual suspects in CBS’s Weijia Jiang and CNN’s Jeremy Diamond after loaded, snarky questions on behalf of their fellow liberal media firefighters, acting with supposed bravery and perseverance.
Things ended poorly for both with the former being told to be “relax” and stop shouting and the latter being called “pathetic,” having questionable levels of brainpower, and working for a “fake news” network with “terrible ratings.”

Starting with Jiang, she sunk herself by fretting that while Trump expressed anger with China for not doing enough at the onset, “many Americans are saying the exact same thing about you that you should have warned that the virus was spreading like wildfires through the month of February instead of holding rallies with thousands of people.”