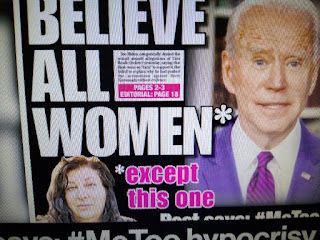 As I said the very first day of the #MeTooMovement, it was bogus.
It was like I was a voice in the wilderness. It took Tara Reade and her allegations against Joe Biden to prove what I said was all true.  Democrats don't care about women like they don't really care about blacks.  Both are political tools to beat the GOP.  Love has very little to do with it.  #MeToo is only a lethal weapon that only works one way.


NY Post reports remember “Believe All Women”? The rallying cry for Democrats and their allies in their bid to derail Brett Kavanaugh’s Supreme Court nomination is out the window now, not two years later. They insist that Tara Reade’s charge that her then-boss sexually assaulted her is not to be believed because — in Nancy Pelosi’s phrase — “Joe Biden is Joe Biden.”

In other words, they were never actually committed to the principle they used to try to destroy a man’s career and reputation. To them, it all depends on the man in question, not the woman.

Biden finally made his first statement about the allegation Friday on MSNBC’s “Morning Joe.” It had been a month since Reade accused Biden of violating her when she worked for him in the Senate in 1993, but not one interviewer had asked the de facto Democratic nominee about it until Mika Brzezinski stepped up.