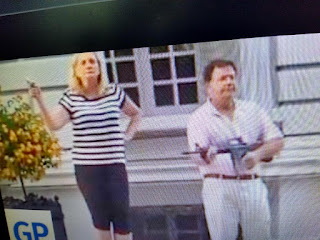 Let's get this straight to a pervasive problem in all the media, including Fox, that keeps referring to law breakers as peaceful protectors.

These people in St. Louis broke through a gated community.  as soon as that happened it's no longer a protest.  But, the media continues to call them that and it's as big a lie as one could tell and it needs to stop!

A couple in the neighborhood were having dinner outside at the time when they heard the commotion. The husband and wife were scared to death at the commotion and went out in their front yard with guns. The Second Amendment is alive and well in St. Louis.