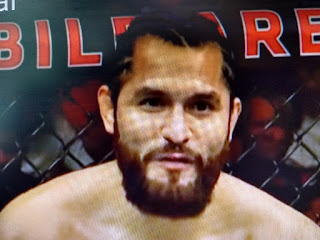 Here's the joke!  Support among Latinos for Trump is strong.
The MSM never mentions and they'll never publish polls about it.  That tell you something!

Forbes reports popular mixed martial arts fighter Jorge “Gamebred” Masvidal was back in fighting shape for his UFC 251 matchup against Kamaru Usman on Saturday night. Despite his unanimous decision loss to Usman, the outspoken athlete made other news this week by fighting for Goya Foods against calls for a boycott of the company.
Last week, following comments by Goya Foods CEO Bob Unanue that many took as overly complimentary of President Trump, critics of Unanue called on consumers to boycott the popular Spanish food company. At an event that was part of the Hispanic Prosperity Initiative, an executive order signed by President Trump in order to improve access to educational and economic opportunities, Unanue announced the donation of millions of pounds of food by Goya to support food banks in the U.S. While doing so, the CEO also heaped praise on the President

The 35-year-old, Masvidal, who is an exceptionally popular fighter in the UFC, and is one of two fighters gracing the cover of the popular new EA Sports video game, UFC 4, took a different approach. In pair of Tweets on Saturday, Masvidol expressed support for Goya Foods, taking aim at the those calling for the boycott of the Spanish foods company and linking to a story about Goya donating a million pounds of food to at the time of 2018’s deadly Hurricane Maria that devastated Puerto Rico.


Actions of @GoyaFoods speak louder than the #woke mob. My people don’t get influenced by those that don’t know. They’ve been helping our people when we needed it most https://t.co/lXYpUcu7uh
— Jorge Masvidal UFC (@GamebredFighter) July 11, 2020